Last week, in the process of talking about blogging and writing and what have you, my friend Sam and I (a film reviewer, who’s posts are absolute gold every time, by the way – go check him out!) decided to do some sort of collab, blog-wise. Bit of a weird idea but he had the great idea of having it sort of like an interview. We sat down, had a banterous chat about the absolute worst Halloween costumes to date (going with the Halloween-y theme of course, the spooky day is almost upon us) and it was a massive laugh. So here’s what happened during that strange lunch time at college.

Jallen: I’m just gonna go right into it, here is my first outfit…

Jallen: He looks a bit like a child. He looks really young, and dead inside. Like “My mother made me do this, she thought it was original…”

Sam: “She thought I’d be a child star. She wanted me to be like Macaulay Culkin or Michael Jackson!”

Jallen: He’s actually an extra in the sound of music. Just in the background.

Sam: I don’t think there’s any way of describing this next costume really…remember the small cute Minions from Despicable Me?

Sam: Yeah well, either way you look at it, THIS is not small or in any way cute.

Jallen: It looks like Jay Garrick from The Flash on crack.

Jallen: He found a Minion costume and just thought “fuck it -why not?”

Sam: If that was your job you’d come home from work and your wife would be like “Hi honey how was work?” and you’d be like “I did some male modelling”.

Jallen: What did you model today? Was it Gucci? Was it Armani?

Sam: No… it was an adult minion costume.

Sam: Are you going to do your next one?

Jallen: Speaking of male modelling we have another man modelling a magnificent outfit. It’s a … I’ve forgotten the word for it….

Sam: That should be our stage name ‘Snake Seducers’ … I like it!

Jallen: Oi, what’re you trying to say? If you look closely our model is actually charming the snake himself..

Jallen: If you can’t get some else to blow on your flute… you gotta do it yourself

Sam: I wouldn’t let him near my kids for sure.

Jallen: I feel like he works at a zoo or something.

Sam: …And he’s just into that kinda stuff.

Jallen: Can we all agree that guy’s snake is far out of proportion.

Sam: Yeah, he’s clearly compensating for something a little bit.

Jallen: He’s definitely lacking down there.

Sam: On the subject of lacking phallic costumes that are slightly culturally offensive (sorry about that) here is my next costume. A Homage to one of my favourite Disney movies of all time, as well as my favourite Disney character ever. Check out this very … um … interesting Genie costume.

Jallen: You did not just reference Aladdin while I was looking at that…

Sam: His face looks like that man from twilight.

Sam: What happened to that kid?

Sam: It’s even got instructions on it!

Jallen: As if you didn’t already think of it when looking at it. In case the really stupid people have no idea what’s going on.

Sam: I feel like he’d be the kind of guy at parties who was really fun to be with as a teenager but has refused to grow up, drinks too much at the work party and generally embarrasses everyone. But no one wants to break it to him he’s not cool.

Jallen: The type of guy going around asking people to rub his lamp, obviously.

Sam: Exactly! Anyway, do you want to do your next one??

Jallen: At parties you always get at least one couple that go in a really cringe-y couple costume and then just sit on the sofa eating each other’s tongues the whole night.

Sam: Ew, Public Displays of affection are genuinely the worst!

Jallen: THAT is definitely not affection. I think you’d have to be very drunk to wear a costume like this… 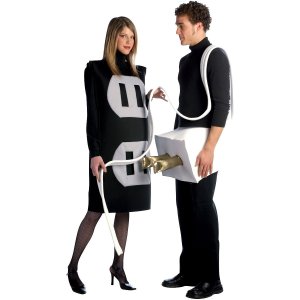 Sam: It’s not subtle is it? Like at all.

Jallen: No it really isn’t .

Sam: There’s no two ways about it, that’s a sex thing.

Jallen: It could be a metaphor for their souls coming together… Soul mates. But then they’re joining in the crotch area so probably not.

Sam: If your significant other was like “Hi, Jess. Can we go to that Halloween Party as a plug and socket” Would you say yes?

Jallen: Sure, I think I would. Just to freak people out…I would totally do that just to cringe people out.

Sam: I probably would too, to be honest. Finally, just when you thought it couldn’t get any worse. You know every year you get those really awkward sexy costumes of things that should NEVER be sexy? Like sexy Pikachu or sexy Mario and Luigi, things that really don’t need to be sexy?

Jallen: Wait, people do that? I don’t want to be in a world like that!

Sam: I feel like this is both… Awkward and horrifically offensive, but genius. I give you. Sexy Osama Bin Laden costume with nose and beard.

Jallen: Oh… My… God! Where did you find that?

Sam: I… I… I slipped and fell on my keyboard.

Jallen: At least at parties people would say you looked the BOMB.

Sam: Did you really just make that joke? PLANE WRONG.

Jallen: On that note we should probably wrap this all up and hope that we are not about to get shanked by a horde of offended people (so sorry). Anything you want to say, Sam?

Sam: I have my own blog which you can find at www.reelreviewdude.wordpress.com it’d love it if you checked that out. I do all sorts of film based reviews, news and top 10 lists. Whilst you’re at it why not follow me on twitter @reelreviewdude 🙂 Thank you so much for having me!

And there you have it, by far the weirdest post on my blog to date. It was, however, great fun to do. Thanks for reading! Stay safe and have a great Halloween!

View all posts by jessicagallen